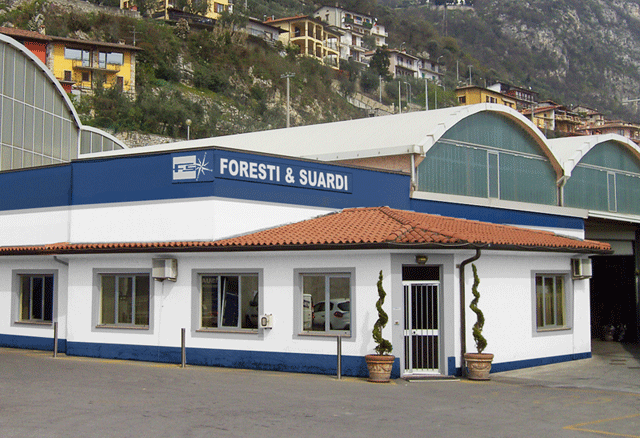 Foresti & Suardi was born in 1961 in Predore, tank to the passion and the deep knowhow of the founders.

A passion and knowhow that are typical of the Iseo’s Lake area, well known for its famous craftsmanship tradition, and for being the seat of some of the most important and prestigious shipyards of Italy, like Riva and Rio.

Craftsmanship ability that evolves into industrial excellence: a history made of people, skills, courage and self-abnegation. A company proud of being one of the last, true foundries, and that step by step evolves into a forge of ideas and becomes the master of new production processes, as well as a reference point among the market of marine accessories, and beyond.

This could be, in a few words, the ascending hyperbole representing the story of Foresti & Suardi factory.

The foundry remains the vibrating core of the manufacturing plant, where 50 operators, selected on the basis of their experiences and competences, are subdivided into specialized departments, depending on the different production phases: everything starts from the mechanical department, where moulds and equipments are prepared to be used in the foundry sector. Here, the brass is melted at 950° and injected into the mould, to be then finished and refined in the “mechanical processing” department. From here the final piece is sent to outsourced state of the art laboratories to be polished and coated with galvanic treatments, then it returns to the headquarter to be assembled and packaged.

The absolute level of the above processes allowed Foresti & Suardi to gain trust of the major yacht builders, giving them accessories and tools that, usually, were produced “in house”. The continuous improvement of the product gave way to a new kind of relation between client and supplier.

There are several reasons behind this commercial and industrial success: first of all curiosity and courage that, along with the above mentioned skills and passion, led to the explorations of new materials, treatments, shapes and technologies. Second, but not least, the deep care the Company has for its employees, corresponding to big investments made for improving the work environment, the training and the sense of belonging to a real family. Also this “human added value” allowed to develop a strong flexibility, able to fulfill the client’s requirements, that usually are different one from another and trough time. A flexibility made of modern tools and instruments, and skilled operators able to prefigure and customize the product depending on the story, the tastes and particular needs of the client, establishing a real synergic exchange process with him, and granting high quality assistance during the production phase as well as during the post-sales period.

It’s not by chance that aboard the most prestigious yachts and, more recently, inside the most luxurious hoses, it’s easy to find the products by Foresti & Suardi, a company that, from the very beginning, is focused onto the technology evolution, and that’s often experimenting new solutions or material before the competitors (for example: among the first to massively implement LED technology for professional and heavy duty applications), and that’s always trying to anticipate, when not impose, the last trends of design and style and that was the first, and this we can surely say, to conceive marine accessories and equipments not only as “tools” in which the function determines the shape, but evolving their role to real furniture and fitting complements. A target that was reached through a never-stopping research activity and with the application of new materials and finishes, in order to “dress” the object of beauty and, at the same time, preserving (or, in most cases, improving) its original function of mere tool.

The described approach has been progressively improved and has grown within the Company, that is today able to offer a strongly diversified series of products, starting from accessories to high quality water tap, and from the innovative series of lighting accessories to the new fitting complements.

A selection that, thanks to the production unit flexibility and to the owners’ initiative, extended its field of application also to the civil construction market and furniture tout court.

The competency of the Foresti & Suardi staff, the flexibility of the production and, above all, the capacity to experiment and to venture are a guarantee of quality and beauty lasting in time, also proved by the several prizes and rewards received by the Predore’s Company: the prize for the “Halley” lamp during the METS Marine Equipment Trade Show) of Amsterdam in 2010 and, in the same context, the category award “NAUTICAL DESIGN AWARDS”.

Foresti & Suardi is used to be the starring of the famous fair of The Netherlands, earning category award and nomination during the “DAME” competition (Design Awards METS), both in 2003 and 2004, thanks to the innovation and design of the “Delphinus” lamps and of the ambience lights ““Andromeda” and “Lyra”.

Another nomination to the DAME award came, in 2012, from the rollaway bollard model “9320”.

Awards and prizes are only one of the proofs that trusting Foresti & Suardi means to choose the higher tradition in terms of industrial and handcrafts production, with the possibility to pick among several styles and finishes, and the certainty to have back performing and indestructible products along with the serenity of having a client’s dedicated service before, during and after the

Those are the cornerstones around which Foresti & Suardi grew and evolved, dedicating all the possible efforts to the client’s satisfaction and to the transformation of his dreams into reality.